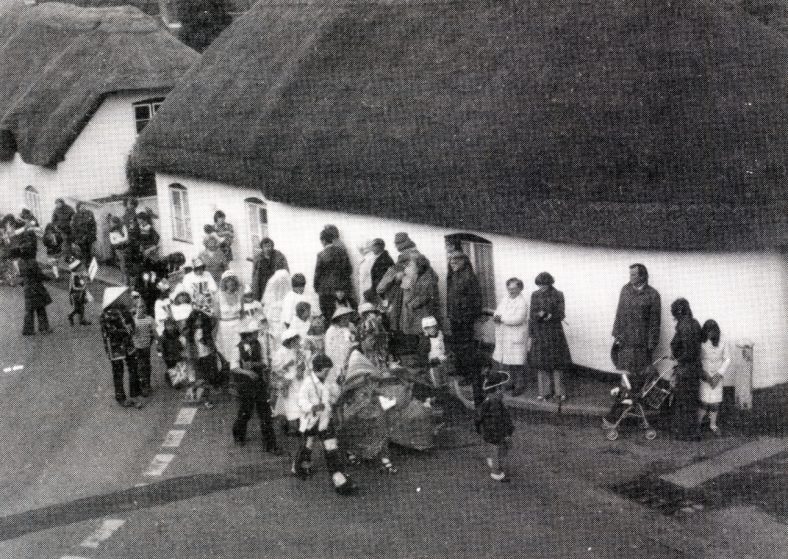 For all parishioners of Wherwell, both young and old, Monday and Tuesday, June 6th and 7th, 1977 were memorable days. The village celebrated Her Majesty’s Jubilee with great enthusiasm and loyalty, and both days were full of entertainment and excitement.

The first event was a tea party for all parishioners which was attended by some 400 people including children. It had been hoped to have tea out of doors in Church Street but unfortunately the only person who did not co-operate was the ‘Clerk of the Weather’ and it was thought wiser to hold the party in the Village Hall. At the end of a delicious tea supplied by the W.I. and Mother’s Union, I had the very pleasant task of presenting every child under the age of 16 with a Jubilee Crown, and I only hope that they will treasure this gift as a reminder of a historic occasion. Over the years these coins will undoubtedly increase in value.

The tea party was followed by sports on the playing field, first for children and finishing with a football match for men versus women, resulting in a draw, thereby confirming complete equality of sex!!

The last event of the day was a very successful bonfire on the top of the hill which ended with a sing-song and a very spontaneous, if not entirely tuneful, rendering of the National Anthem.

Tuesday afternoon began with a magnificent fancy dress procession which included cars in “fancy dress”. The procession started on the sports field and came right through the village and past the Old People’s Home, down Mill Lane to the Priory where I had the pleasure of giving away the prizes for the best costumes, some of which were very clever and imaginative.

In the meantime, (in fact since about 3 p.m.) feverish preparations had been going on in the park under the leadership of two Argentine gentlemen, Mario and Alcides, for a real Argentine style barbecue. An enormous fire was built and five whole dead sheep were correctly strung up on iron crosses and roasted over hot embers. This took rather longer than expected (it always does!) but our pangs of hunger were allayed by sausages also cooked over the embers and very delicious. There was plenty of beer to allay thirst! When the mutton was eventually ‘done to a turn’ it was cut up and handed out by Mario and Alcides and was pronounced by everyone to be the best they had ever eaten.

And so, with another sing-song round the fire, ended Wherwell’s celebrations for Her Majesty The Queen’s Silver Jubilee — a very fine feat of organisation by the Committee and a wonderful example of what can be achieved when the whole village pulls together. I hope that everyone, and especially the children, will carry the memory of these days with them for the rest of their lives and that some may be fortunate enough to be able to express their loyalty again in twenty five years time.

God Save the Queen.

Comments about this page