You are here: HomenextHistorynextBuildingsnextHome Guard Training Pillbox at Fullerton 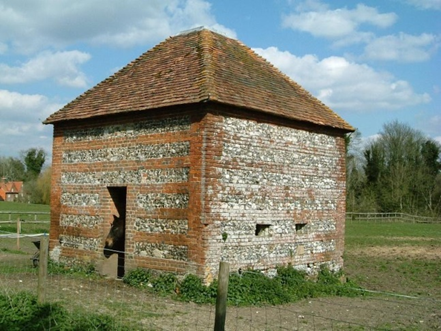 The 1st Hampshire (Andover) Battalion Home Guard set up a training area and firing range on land opposite the Manor Farm cottages at Fullerton. Here they set up a small-arms firing range and various assault courses and from time-to-time used the River Test to wade across and plan attack strategy.

A pillbox which had been disguised as a barn was often incorporated into the Home Guard training. The pillbox was originally part of the Salisbury East Stopline running from Totton near Southampton to Basingstoke via Romsey and the Test Valley.

The Pillbox has a pair of stepped loopholes in both ends as well as one remaining in the south east, facing front, this single remaining loophole can be seen through the open doorway where part of the south east facing wall has been roughly knocked through to make access for the horses which now inhabit the former training area. The inner walls are approximately 18″ thick up to just below the door lintel. Just visible through the doorway was the angled splay on the interior side of the loopholes, but there was no evidence of a supporting shelf below these.

The Fullerton Training Area was also used as a place to demonstrate the skills that Home Guard personnel had attained and to show these off to visiting high ranking officers, including Field Marshall Montgomery.

Andover author Tony Raper has written a book about the Home Guard in Hampshire, which as of August 2021 is awaiting publication.