You are here: HomenextHistorynextWherwell History Walk 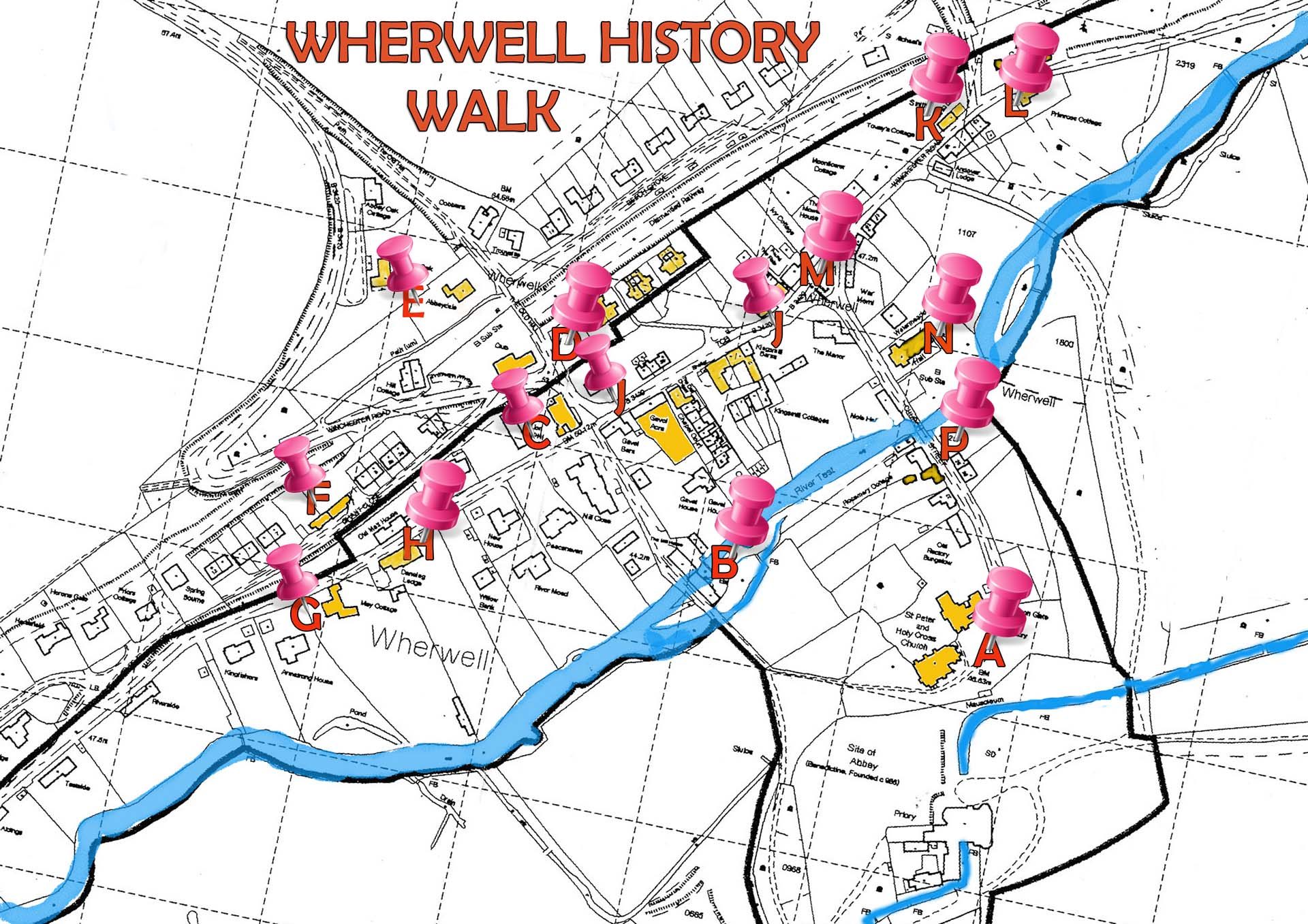 The earliest mention of Wherwell is in the Will of King Edred (946  955) when Whorwell, Andover and Clere are bequeathed to Hyde Abbey, Winchester. In 1066, the Domesday Book records six manors (all held by Wherwell Abbey) assigned to the Welford Hundred  – Wherwell, Tufton, Goodworth, Little Ann, Bullington and Middleton. Wherwell Abbey was founded in 986 by Queen Elfrida ‘in absolute and total remorse’ for the murder of her stepson Edward the Martyr. Elfrida had married King Edgar the Peaceable after he had slain her first husband Earl Aethelwold in Harewood Forest in 963, because he duped the King about the beauty of Elfrida. King Edward succeeded King Edgar in 975, was murdered at Corfe in 978 and in turn was succeeded by Elfrida’s son King Ethelred II the Unready (circa 968  1016).

A little over a century after it was founded, the Abbey was burned down during the Stephen and Matilda Wars, but was swiftly rebuilt. About 1186 the Abbess Maud of  sweet memory’ and of good and noble birth’ began her rule over the Abbey, which she maintained for forty years, dying at the age of eighty. She was succeeded in 1226 by her friend, the blessed Abbess Euphemia, a remarkable woman who scorned a life of ease, rooted out laxity and evil and encouraged ‘good and useful purposes’. Under her pharmacy she made a water channel through which a stream of sufficient force swept all refuse that might corrupt the air, in other words, an early sewage disposal system, still visible today. In mid-16th Century, Henry VIII dissolved the Monasteries and traded the Wherwell Estate to Lord De La Warr, in exchange for five Manors in Sussex. For the next 300 years, historical detail is confined to a succession of changes in ownership, culminating in the grand sale of 1913, when the Iremonger family sold Wherwell Priory Estate to Sir Ernest Cassel. Today’s Priory is built of  brick, is widely spread and low, and white faced throughout  apart from patches of local flint in some minor walls. The North front is pure, early, select Georgian (1714  1837).

The present Church of St Peter & Holy Cross was rebuilt between 1856 and 1858, at a cost of £2,597, which was paid for by the Iremonger family. It overlaid the footprint of the C12th Norman Church, which was in a dilapidated state owing to old age’. It was built by a local firm owned by Mr Holdway to a design by the Victorian church architect Henry Woodyer, which enabled a further eighty eight pews to be added to accommodate the poorer inhabitants of the community’. The church has a peal of five bells, four of which were cast in 1707. In 2010, a phased programme of restoration was launched to renew and repair the Nave roof, tower & spire and drainage system, along with bell-frame enabling work and restoration of the turret clock. Pending a return to full-circle ringing, an Ellacombe chiming mechanism has been installed, which allows one person to chime all five bells. 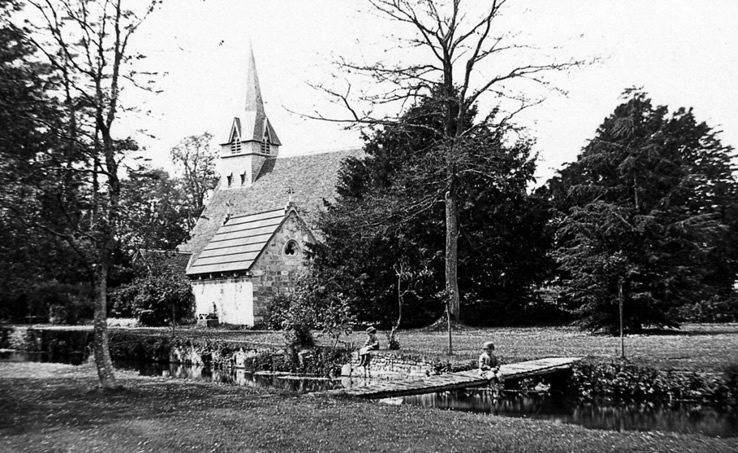 Our church today looks much as it did in this photograph of 1869. It replaced an earlier Norman church, and is constructed of flint and Bath stone. 2011 was the start of a massive restoration programme. The red tiled roof and oak shingled tower and spire were completely refurbished. The Mausoleum (foreground) has been used by generations of the Iremonger family. 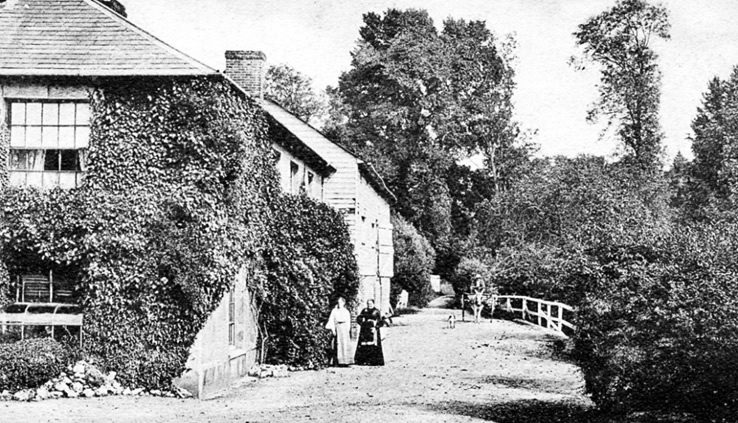 B : East Mill and Mill Lane

Abbess Euphemia (c.1226) chose this site to build an improved water mill, which still houses many of the cogs, paddles and four grindstones which existed during its working life. For nearly 20 years, until the Priory was connected to the National Grid in 1952, water power generated electricity for the Priory and Church. 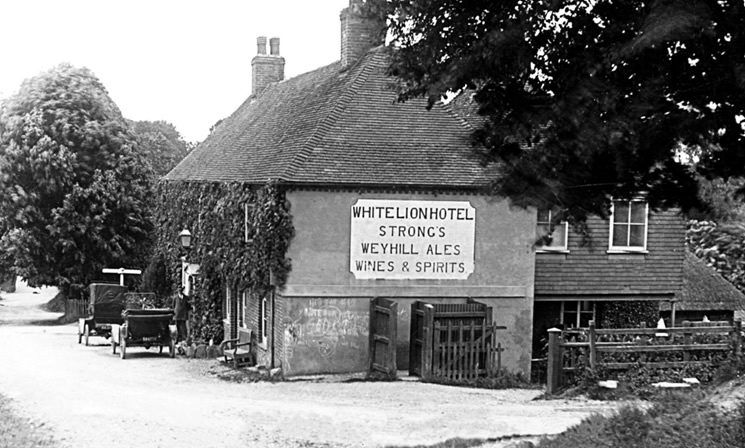 This postcard view is mid 1920’s. Built in 1611, as a Coaching Inn on the main turnpike road between Andover and Winchester. Displayed in the Bar is a Civil War cannon ball from 1642. Fred Pyke (1907) & his son Vic (1947) were the longest serving innkeepers. Outside there is a magnificent barn, which was recently re-thatched. The stables once accommodated as many as eight horses, including a trace horse to assist carts up the hairpin bend. 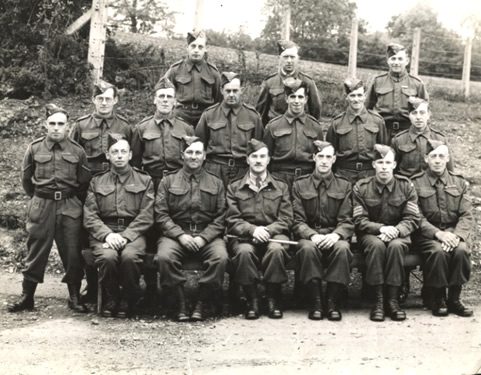 The Home Guard Club originally a Nissen Hut, was moved here in 1946 and extended in 1991. The discovery of a Roman’ skeleton started WHG in 2008. In 1215. King John granted the Abbey the right to hold an annual fair adjacent to the Old Hill. The C20th cottages were built for the village policeman and the Priory heads of department. 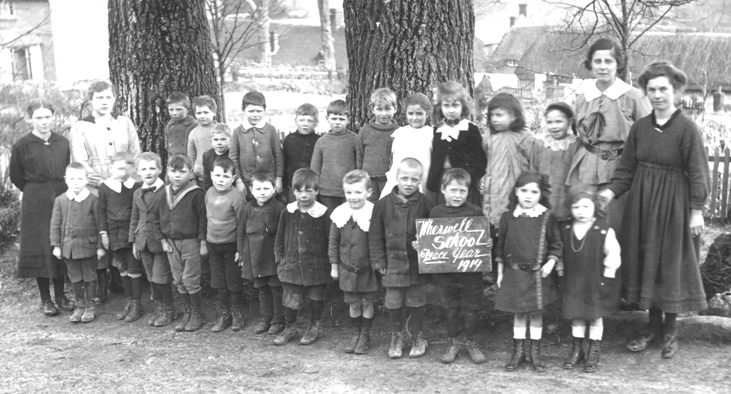 Site of the old Church School from 1903 until 1928, when it merged with Chilbolton school and moved to its current site in Longparish Road. Abbey Oak was built in 1926 for Charles Grace, whose housekeeper was an opera singer. The council houses in Beech Grove are late 1940’s. 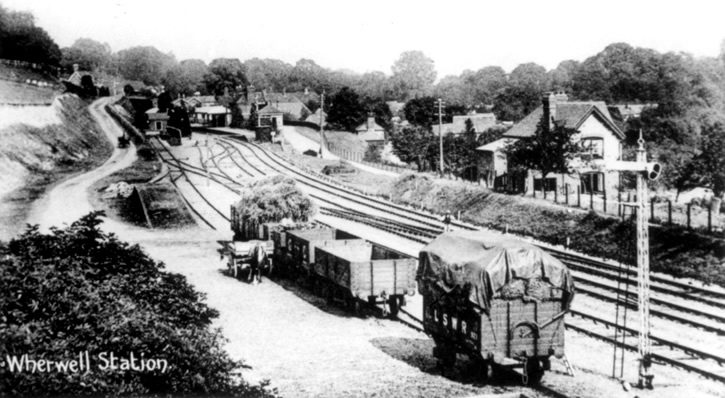 Opened 1st June 1865 as a twin track line between Hurstbourne and Fullerton Junction, joining the Andover to Redbridge line to Southampton. Closed to passengers in 1931 and lifted in 1956. Much loved by Queen Victoria on her frequent trips to Osborne House, Isle of Wight. During the 1920’s the station was the location for the silent film The Ghost Train’. 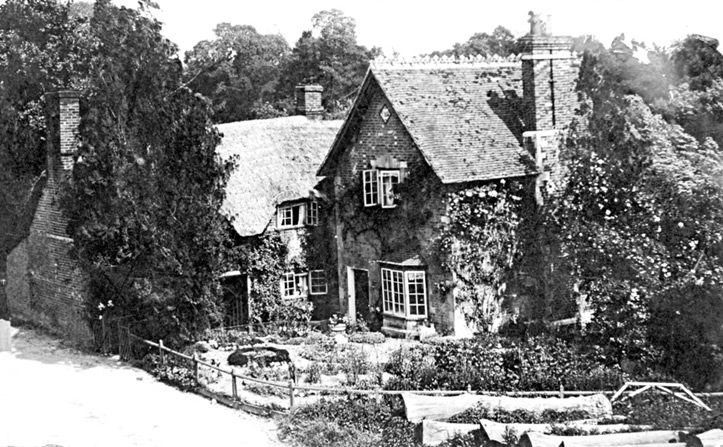 Once a laundry for the village run by Mrs Holdway. The washhouse and buildings used were mainly sheds at the rear of the cottage. Nearby were Thompson’s timber yard, their Car Factory and Mrs Spratt’s newspaper shop and Post Office. 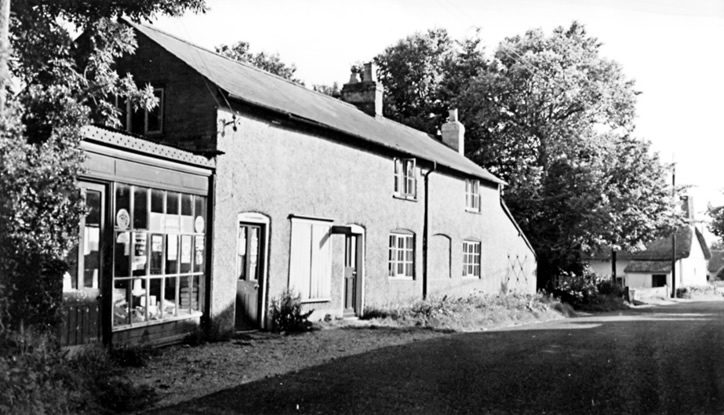 Bevis Grocers, bakery, hardware and confectionary, in the 1930’s, now Dancing Ledge. Previously known as Blackalls, who delivered bread in a horse-drawn cart. Opposite is the Old Malthouse and the site of Bill Spratt’s Carpentery shop and office. 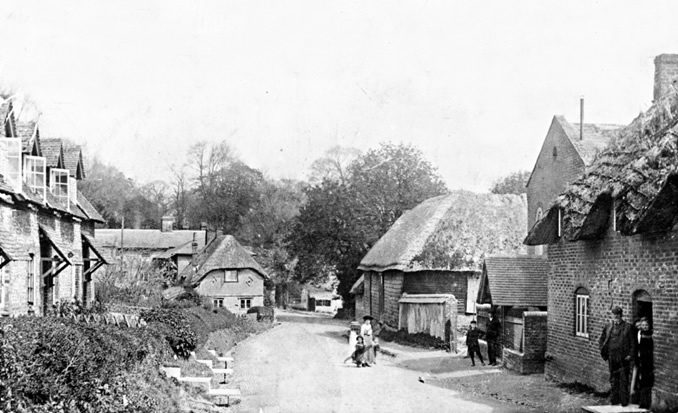 Gavel Acre is thought to have been a farm connected to a manor in Longparish. Standing outside is Andrew Baker, the Wherwell Carrier’. Next door is the Wesleyan Methodist Chapel built in 1846, now a private dwelling. Beyond is Kingsmill Barn (right) and Chestnut Cottage (left), once known as Chadwick’s Tea Rooms, a haven for Servicemen during WWII. 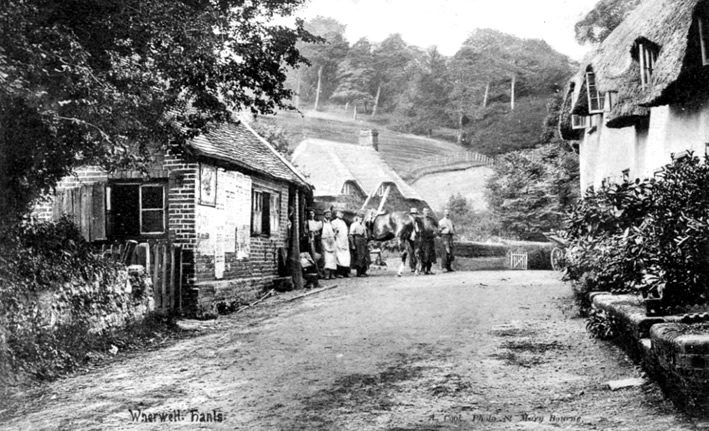 The blacksmith’s forge was used for shoeing horses, mending farm equipment and some decorative iron work. The last blacksmith, until 1960’s, was Kurt Lissener, an ex-German POW. The forge, etc. are now housed at Beaulieu Motor Museum. The Smithy was rebuilt as a private dwelling in 2000. Opposite is Forge Cottage & Tovey’s Cottage. 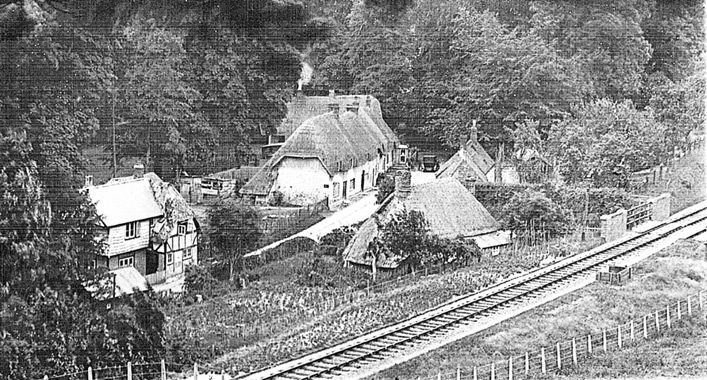 View from the Mount, showing single track railway (post 1915). On the left is Sydney Trodd’s cottage and builders yard, now Primrose Cottage. On the right is Mount Cottage where Nurse Smith lived; a small hut still stands in the garden which was the dispensing and consulting room. 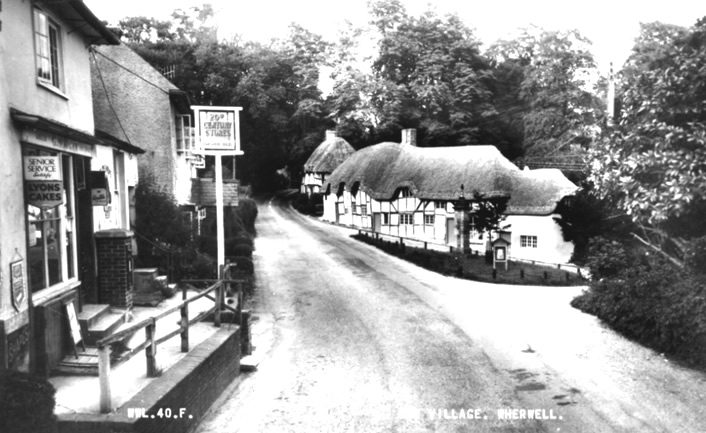 Wherwell’s most famous scene! On the left is the 20th Century Stores, which closed in 1999. The shop, post office and public bar were run by two generations of Olliffs, and the baker was Mr Hams from Tovey’s Cottage.. This 1964 picture shows a young Pound Tree which replaced the famous Elm felled in 1956. The current street scene is without any tree. 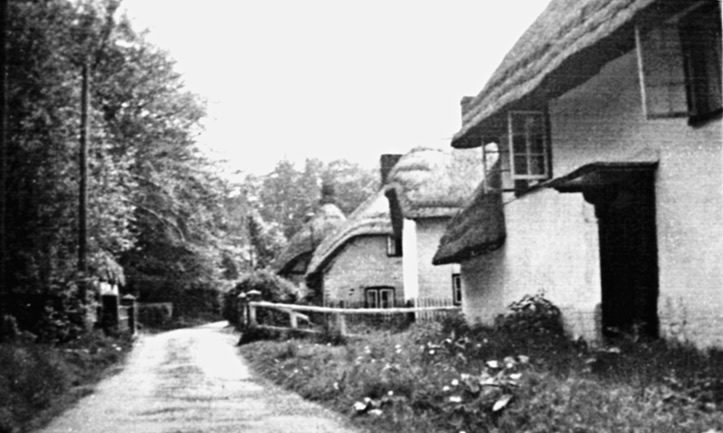 The Colonel Jenkins Memorial Hall, built in 1957, replaced an earlier one, known as theIron Room’, erected in the 1880’s by Lady Agneta Montague of Wherwell Priory. Opposite, Mole Hall, originally a farmhouse and creamery where Digger’ Young lived, has been stripped of its exterior plasterwork and now looks completely different. 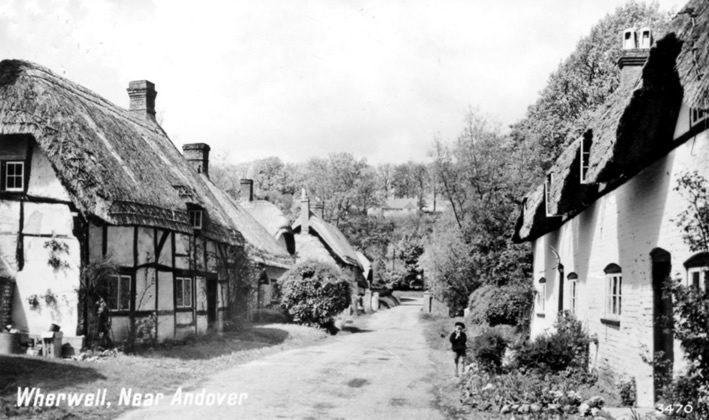 No 28 (left foreground) is the only dwelling built during the life of the Abbey, of late medieval timber construction with three bays. It boasts some beautifully carved beams which certainly would have originated elsewhere. Opposite are Antler and Apple Cottages, recently restored after a thatch fire on Good Friday 2013.