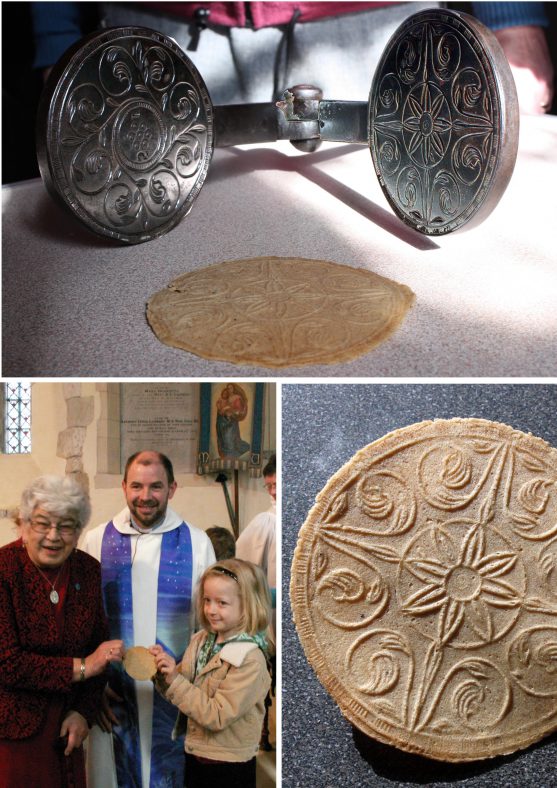 It was about this time last year when we had one of our more unusual phone calls at the Rectory. “Please can you send me some Chilbolton Wafers for Mothering Sunday?” came the request. Of course, we’d only been here about eight months at that point and I had no idea what Chilbolton Wafers were or where to find them. So began my research into Chilbolton Wafers.

Eleanor Lockyer’s book was fantastic as it explained all about the tradition of Chilbolton wafers and all about the Baverstock tongs. I had many long phone calls with the folk at the Andover Museum who were very helpful and I looked at newspaper cuttings and photos kept at Horseshoe Cottage. Then after a few months of the trail ‘going cold’, we were put in touch with Mr. Will Poore, a member of the Baverstock family who grew up in the village, and were able to ask him about the Baverstock tongs. Not only was he able to tell us all about them – he showed them to us! I was amazed to see them and handle them – they were surprisingly heavy. It was such a thrill to be holding such an important piece of Chilbolton history.
Now the secret recipe for the wafers had been lost.

Will’s Aunt Tilly was the last member of the family to make any wafers and she took the secret of the receipt to the grave with her. However, once you start researching something it’s amazing what you find. I shared the problem with Sue Batchelor, our choir-leader, and she unearthed a most interesting book of medieval cookery. We were so surprised to find an entire chapter on Waffles and Wafers. The book described how wafers were made, when they were eaten and some of the traditions around wafers. Apparently, wafers were listed in the items for the archbishop’s feast held as early as 1295 and Cardinal Wolsey was so fond of wafers he employed two waferers in his private wafery. The book also described the irons used to make wafers. The irons, or tongs, consisted of two flat discs that were incised (embossed) with different patterns on the inside surface of each and that there were two handles about 2 ½ feet long. One handle usually ended in a knob and the other in a ring which slipped over the knob of the handle so that the discs could be held tightly together with the batter between them. It seemed to us that they were describing the Baverstock tongs exactly.

With new-found confidence, encouraged by the book, and using one of the ancient recipes, Sue and I made our first wafers. They looked disgusting, very black with the dirt of ages! Subsequent wafers, however, started to come out really nicely. We’ve experimented with different recipes, different spices, different cooking times and we now feel we are getting the hang of it. One of the funny things that took us by surprise is that on occasions when I closed the tongs, especially if they were very hot, or perhaps when I closed them too quickly, the wafers seemed to ‘sing’! (as the air escapes there is a high pitched noise – for the less poetic amongst us). When I first mentioned this phenomenon to Will he wasn’t sure he had ever heard it but his older sister Evelyn could remember as a child hearing that distinctive sound when she saw the wafers being made.

Now the race is on to produce enough wafers to revive this ancient tradition in time for Mothering Sunday on the 14th March.

This page shows a fantastic picture of the tongs and explains the meaning of the letters to be found on one disc. One disc is embossed with the letters I.S. – Iesus Salvator (L) Jesus the Saviour. The other disc has a central 8 pointed flower. Interestingly the circular tracery pattern on the two discs marry up, so when you hold a wafer up to the light you can see the circles on one side of the wafer are in the same place as those on the other side. What workmanship!

For those keen to do a bit of research of their own, try feeding ‘Medieval Wafering Tongs’ and ‘Medieval Wafer Recipes’ into your search-engine and see what comes up. Sue’s “Old Cookery Notebook” written by Mrs Groundes-Peace contains lots of useful information including pictures of wafering tongs of the sixteenth century