You are here: HomenextHistory TopicsnextPlacesnextBrief History of Shops and Traders in Wherwell

Brief History of Shops and Traders in Wherwell 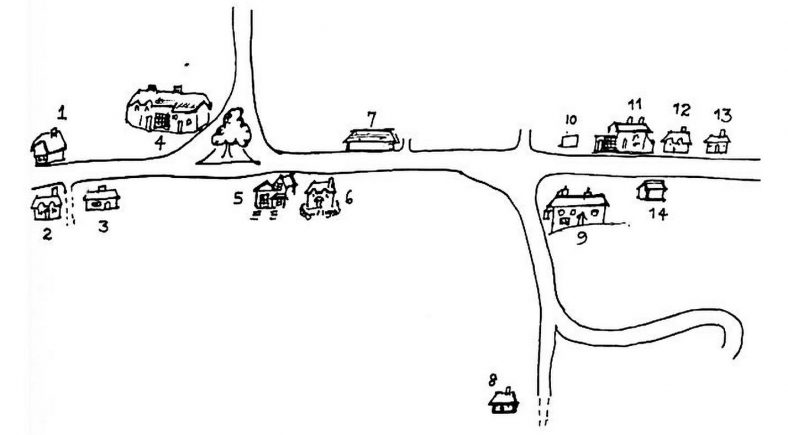 The village has always relied on farming as a source of employment and until recent times was, more or less, a self-sufficient community. It boasted three general stores, a forge, two cobblers, a laundry, two public houses, two general builders, a tea shop, dispensary and midwife, and two coal merchants.

No. 1 General Builder and Undertaker

Sydney Trodd bought Mount View Cottage (now Primrose Cottage) in 1919, whence it was considerably extended to make a family home and business premises for a general builder and carpenter, who was also an undertaker and coffin maker.

Nurse Smith ran a dispensary and performed the duties of a midwife from Mount Cottage. Many of the villagers were brought into the world by this lady.

The aptly named Mr Smith (Walt Smith’s father) ran the forge when shoeing horses and making wheels were the main occupation. After he retired Mr Hallet and then Kirk Lisner carried out wrought ironwork. When Mr Lisner left, the forge fell into disrepair and was replaced by the current dwelling in the year 2000.

This house, a prominent village feature opposite the War Memorial, has been used for various types of trades, butchers, crockery and finally a shoe shop. James Tovey was a cordwainer (shoemaker) with a workshop opposite the Forge.

No. 5 General Store and Public House

Prior to William Stewart Hair Design, 20th Century Stores traded as a bakery with General Store, and adjoining public house (Simmonds Brewery). It was owned in turn by Mr & Mrs Olliff, Mr McKenzie, Mr Humby and Mr Brown (who closed the Public House part in 1949). Mrs Grace Morgan owned it from 1952 and in 1955 converted it into one large shop. When Brian and Lydia Knight took over in 1987 it was the only retail business left in the village, not counting the White Lion Inn.

Louis and Florence Chadwick, and their daughters, built up the business from a few cups of tea, to weekend travellers, to a recreational centre for servicemen stationed in the area during the WWII. Mrs Chadwick continued the business for a few years after her husband’s death in 1945, eventually being persuaded by her family to retire for the sake of her health. The Tea Rooms made a brief comeback for two years in the late 1990’s.

Fred (Digger) Young’s smallholding, including stable and dairy, was centred around Gavel Barn. Rose Young (sister) delivered the milk. As many as six heavy horses were used by the haulage business or for delivering coal on Saturday mornings.

A shoe-making and repair business was run by Will Monk from the house up the Old Hill (known as the Shute or Chute ?). The house name was changed from Cobblers to Chute Cottage in 1999.

There has been an Inn on this site serving travellers on the toll road between Andover and Winchester since about 1612. In 1907 Mr Fred Pyke was the licensee and forty years later his son took over. Victor and Mary Pyke retired in 1978. After a couple of short stay tenants, Patti and Adrian ran the pub from 1987 until 2009 when Debbie, Shaun and Kevin became ‘Mine Hosts’.

In ‘No. 9’ Mr Fred Pyke was described as the landlord of the ‘White Lion’ but he had more than one string to his bow, he also sold coal from premises on land which now houses ‘Lions Den’ and ‘Nos. 1 & 2 Lime Tree’

This store had a number of owners; The Blackalls, Mrs Rose and Mr Bevis who sold it to John and Grace Morgan. They ran the shop with their assistant Joy Tribbeck while Mr Bevis lived in the house. When Mrs Morgan purchased 20th Century Stores they closed this shop and converted it into their house ‘Dancing Ledge’. Joy became the Manageress of the 20th Century Stores and lived there with her husband Charles Long until her death.

No. 12 Laundry (with Timber Yard adjacent)

This was run by Mrs Holdway, assisted by Mrs Carter, from her home at May Cottage. The wash-house was in corrugated iron sheds; a donkey and cart were used for deliveries. Spratt’s timber yard next door was where the Messrs Thompson and Son built the Wherwell Car in the early 1920’s.

Mr and Mrs Spratt ran the third general store which also was the post office and Mr Spratt was postmaster and postman. After Mr Spratt died his widow married Mr White. They continued to run the store and post office until they retired, when the post office was transferred to the 20th Century Stores.

No. 14 General Builders and Carpenters Workshop

Another Spratt family ran a successful building company from small premises (now demolished) on the West side of the Old Malt House and were responsible for many of the ‘newer’ buildings in the village including Sunny House, formerly Southcroft.

This page is based on an original article was first published in the Wherwell Anthology XVII (1990) under the title Trade in the Village of Wherwell’. A few details have been updated to reflect recent changes. There is a much more detailed account of village shops and village life in Percy Trodd’s book Wherwell and Chilbolton  Personal Memories and a Little History. The Anthology article was written by Brian Knight (see No. 5) with help from Phyllis Harding.

Comments about this page