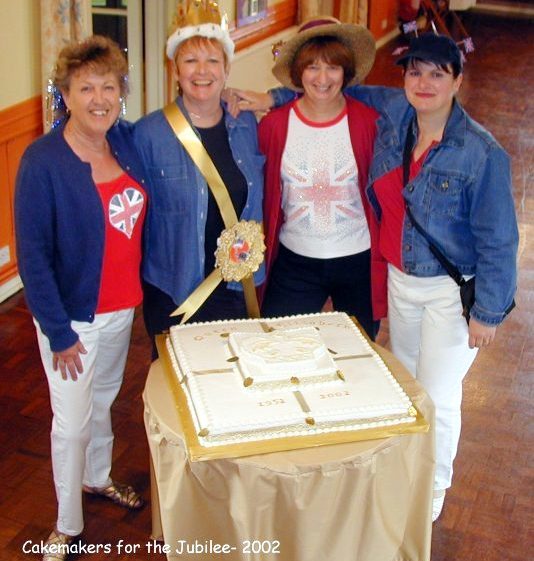 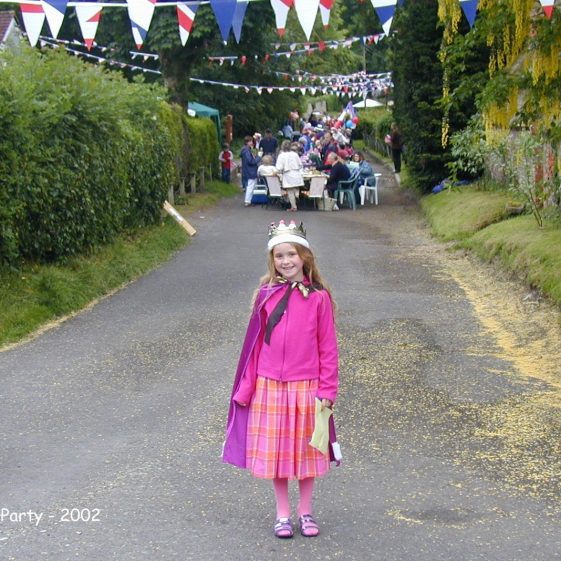 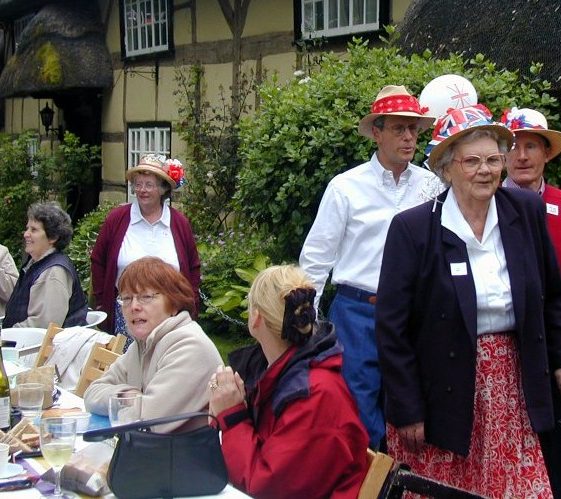 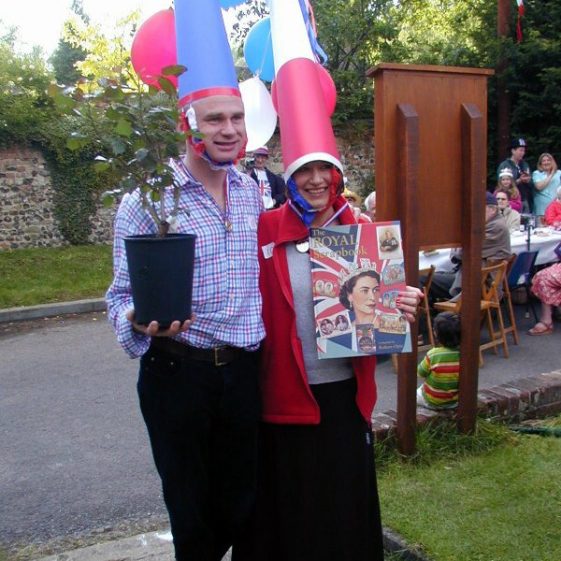 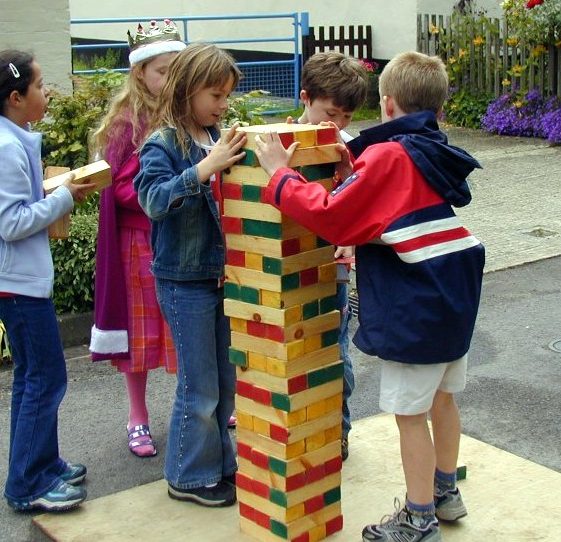 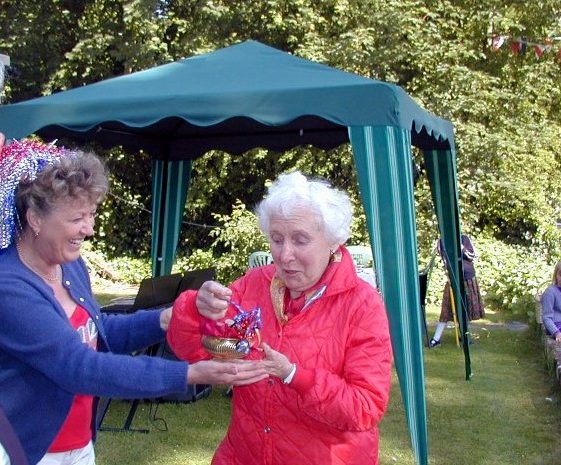 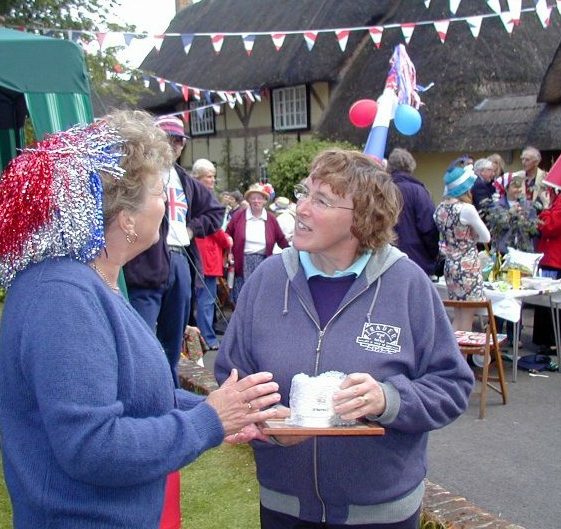 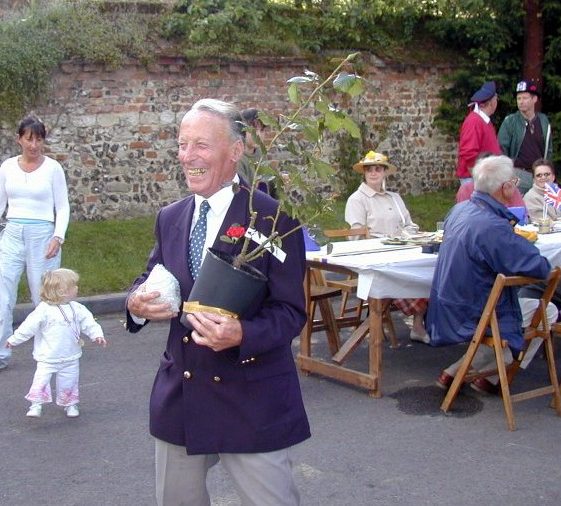 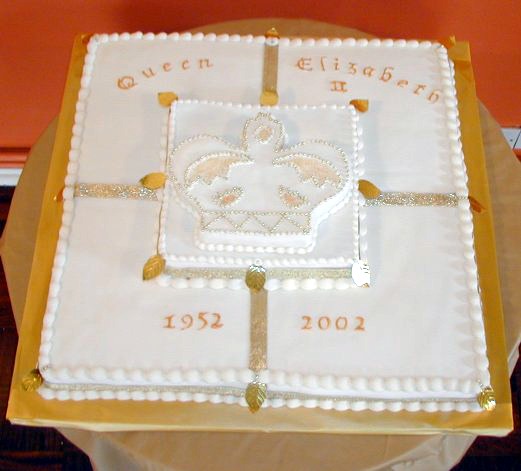 It all began back in May 2001, with a group of friends, a bottle of wine and a passing comment, “What is happening about the Queen’s Jubilee?” Answer: “What Jubilee?”

Eight months later, some of these friends attended the Parish Council Meeting and asked,

” What is happening about the Queen’s Jubilee?” They were invited to return with a proposal… so they did. Thus, the Wherwell Jubilee Committee was formed and the weekly Wednesday meetings commenced. From the start, the aim was to provide a celebration of a unique event, in a way which would hopefully appeal to everyone. After much deliberation (and more wine) it was decided that a Street Party in Church Street would fit the bill… and it did.

The Parish Council had approved a grant and by inviting further donations another aim was achieved – that the event should be free to all residents. It was a busy time. Letters were written, telephone lines buzzed, sewing machines whirred, computers crashed… you get the
picture?

After a brilliantly sunny weekend, which was spent putting up the red, white and blue bunting and decorating the Village Hall and tables, Monday, 3rd June 2002, dawned – grey and wet. The intrepid Wherwell Jubilee Committee members and their spouses sallied forth, ever optimistic. Just as the “jubilant” tables were about to be positioned, the heavens opened and their hearts sank. Nevertheless, they carried on and the weather decided to relent.

At 2pm, their spirits were lifted as the first arrivals sported brilliant Jubilee hats. The Jubilee Hat Parade was going to be a success… and it was. Everyone entered into the fun of the afternoon and was entertained by the live music, the Queen Quizzes, Royal Wordsearch, Treasure Hunt, Pin the Crown on the Lion and Tarot Readings. The Face Painting, Giant Jenga and Connect Four were particularly enjoyed by the children, as were the free ice-creams.

At 4pm tea commenced. 501bs of strawberries, 2 gallons of cream and a splendid 2ft square, three tiered, Jubilee cake were consumed, together with tea, coffee and squash. Over 200 glasses of “bubbly” were raised in a loyal toast to Her Majesty Queen Elizabeth H. Afterwards, “God Save The Queen” was heartily sung.

Then it was time for the Prize-giving for the Quizzes, Wordsearch and Hat Competitions, followed by the Grand Free Draw with a first prize of £50 in golden coins. Golden Jubilee roses, Wherwell Jubilee mugs, tea caddies, tea towels and moneyboxes were presented to the lucky winners. This brought a very happy community event to a close.

So, the party was over, the police had checked there were no stragglers or stray cones, and Church Street was returned to its usual tranquillity. The positive feedback was overwhelming and the Committee felt that all the time and effort expended had been really worthwhile.

Now the friends could relax and let their hair down and… they did!